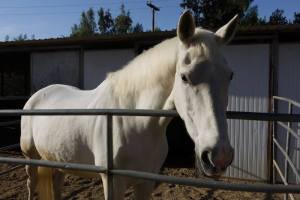 Moira, AKA “SUNAIR’S LEGACY”
Moira is an approximately 30 years old, Irish Draught (pronounced draft) Horse that we were told actually came from Ireland. She is all white. Moira came to us after her old owner moved away for college and didn’t want her to be left all alone, doing nothing since Moira loves people, especially little children and babies. Moira is approximately 16 hands and is great for some of our bigger kids and for our students that need to ride with an Instructor. Moira got her second name from the SUNAIR Children’s Foundation who has been sponsoring her.